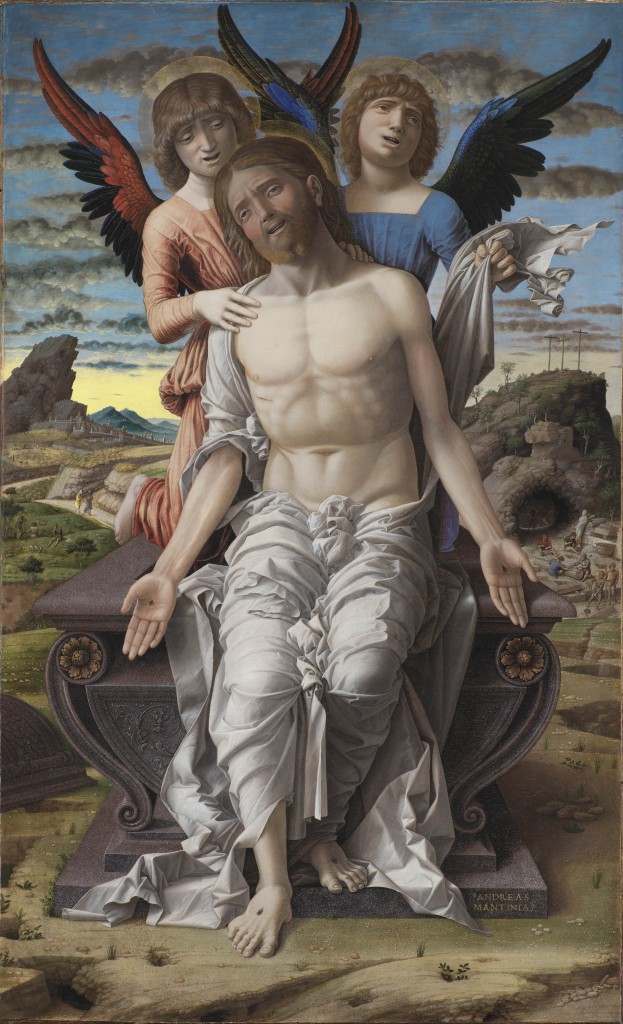 This painting is a bit of a challenge, as you need to find angels. But maybe some colorful cardboard can serve as wings. Try to find a piece of cloth for recreating the drapery on Christ's body.

Like other artists of the time, Mantegna experimented with perspective, e.g., by lowering the horizon in order to create a sense of greater monumentality. His flinty, metallic landscapes and somewhat stony figures give evidence of a fundamentally sculptural approach to painting.

This monumental painting shows the resurrection of Christ and is based on the Gospel according to St. Luke (24: 1-2):

”Now upon the first day of the week, very early in the morning, they came unto the sepulcher, bringing the spices which they had prepared, and certain others with them.”

This painting follows the text in its depiction of the landscape in the background. The women are approaching on the road leading from Jerusalem to Calvary. However, the main characters in the painting, Christ and two angels, are not mentioned in the source text.

Half shrouded in his cerements, the risen Christ displays his five wounds. Joined by two angels supporting him, he appears to be praising the Lord with a hymn of thanksgiving.

Mantegna has created a painting that merges two picture types with its foreground and background. The background refers to the story related in St. Luke, whereas the image of Christ is a so-called devotional picture, a type of image that condenses a biblical event (here the Passion) into a single intense close-up.