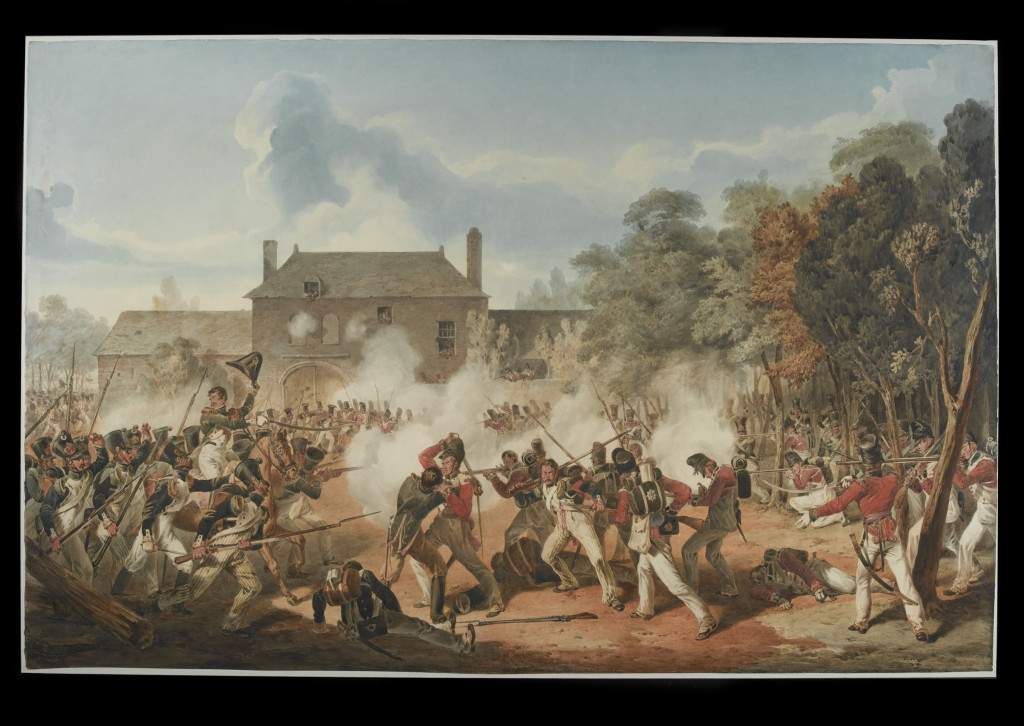 Defence of the Chateau de Hougoumont by the flank company, Coldstream Guards, Battle of Waterloo, 1815.

The Chateau de Hougoumont was a strong-point in the British defensive line during the Battle of Waterloo on 18 June 1815. Hougoumont was not taken in nearly nine hours of continuous fighting. The nearest the French came to capturing the chateau was when a determined attack by Sous-Lieutenant Legros (nicknamed ‘L’enfonceur’ or ‘The Smasher’), wielding a huge axe, managed to break through the North gate. The commanding officer, Lieutenant-Colonel Macdonell and his Guardsmen managed to shut the gate, trapping 30 Frenchmen inside. They were all killed apart from a young drummer boy who was spared.

Wellington was quoted as saying Waterloo was ‘the nearest run thing you ever saw in your life.’

The overthrown French Emperor lived out his days in exile on the island of St Helena in the southern Atlantic Ocean. When he died on 5 May 1821, the cause of death was recorded as cancer of the stomach, although traces of arsenic found in his hair suggest that he may have been poisoned. Painted in the month of Napoleon’s death, this picture may also allude to this news in the discarded newspaper seen on the floor in the foreground. With this event, the threat posed to Britain and Europe by one of the world’s greatest generals was finally over.