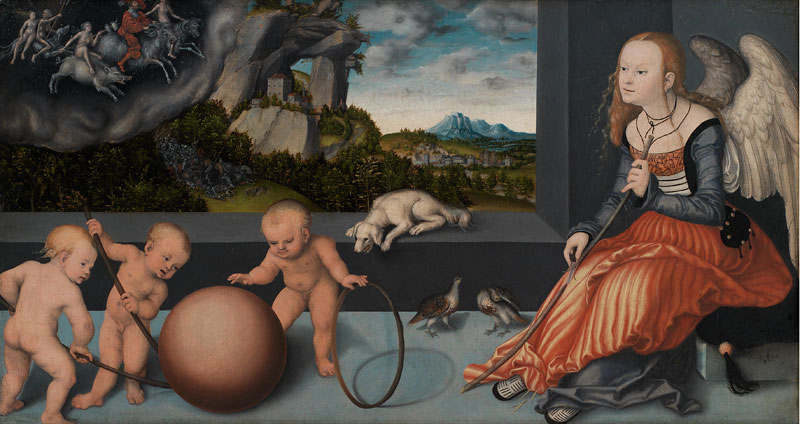 Replace the playing children with dolls or even ask adult friends to jump in. Every detail counts in this image. But it is also open to interpretation. So, you might play around with these little hints just by using other objects that might only make sense to you.

With only a stick to help them, three nude boy children attempt to play a game, the object of which is to pass a large ball through a hoop.  A winged woman, lost in thought, splits a stick, seemingly in the process of making another hoop.

Through reference to a similar figure in an Albrecht Dürer print, the seated female has been read as a personification of Melancholy, one of the four temperaments. Renaissance scholars believed that the world was built from a system of correspondences. Melancholy was associated with Saturn, winter, the dragon, lead, and earth.

In Cranach’s painting, melancholy seems to be linked to something negative: a demonic witches’ ride takes place in a black cloud outside.  Perhaps Cranach’s Melancholy reflects his friend Martin Luther’s perception of melancholy as a ”bath of Satan” to be fought with ”spiritual joy” and faith in the Word of God.

Whatever the case may be, the enigmatic nature of Cranach’s painting leaves it open to individual interpretation.