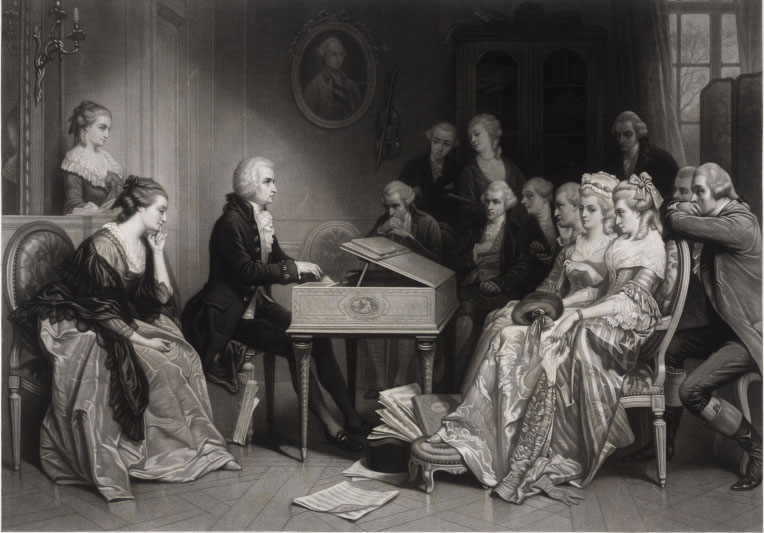 Edouard Hamman, (1819-1888) – Painter,  Alfred Corniliet, (1807-1887) – Engraver,  Alfred Jeune Chardon  (1830-1897)  – Printer
Mozart sat at the spinet (a small type of harpsichord) surrounded by a group of attentive listeners who are taking in the delights of samples from the opera Don Giovanni for the first time.
Mozart’s new career in Vienna began well. He performed often as a pianist, notably in a competition before the Emperor with Muzio Clementi on 24 December 1781,[48] and he soon “had established himself as the finest keyboard player in Vienna”.[48] He also prospered as a composer, and in 1782 completed the opera “The Abduction from the Seraglio”, which premiered on 16 July 1782 and  was soon being performed “throughout German-speaking Europe”,[48] and fully established Mozart’s reputation as a composer.
With substantial returns from his concerts and elsewhere, Mozart and his wife adopted a rather plush lifestyle. They moved to an expensive apartment, with a yearly rent of 460 florins.  The Mozarts sent their son Karl Thomas to an expensive boarding school and kept servants. Saving was therefore impossible, and the short period of financial success did nothing to soften the hardship the Mozarts were later to experience.
Source: Wikipedia and Picture Archive of the Austrian National Library.