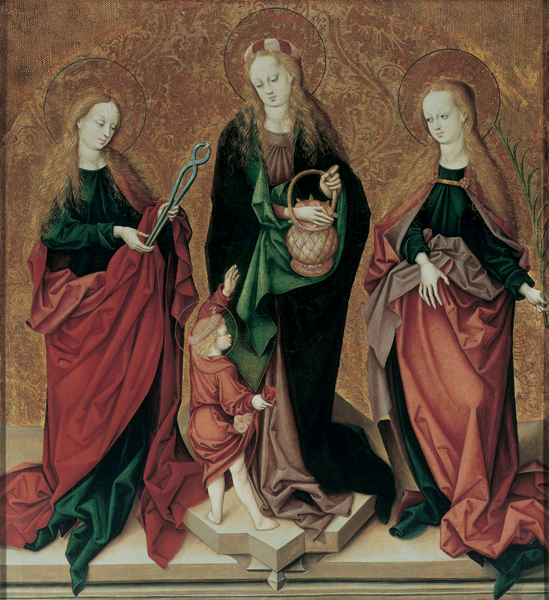 A lot of magic and atmosphere is created with the golden backdrop. Try to find a backdrop that recreates this atmosphere. And now that you know of the importance of symbols in iconography, try to recreate the image according to the tradition. Or just re-invent your own iconography!

If you are familiar with christian iconography (“the language of images”), it is easy to identify saints in religious paintings. Usually Saints carry symbols which relate to their often very gruesome fate: the martyrdom.

In our painting Saint Apollonia is easy to identify: according to legend, her martyrdom included having all of her teeth violently pulled out or shattered. For this reason, she is popularly regarded as the patroness of dentistry and those suffering from toothache or other dental problems. In our painting she carries forceps holding a tooth.

The second woman, Saint Dorothy, is also easy to identify when you know the language of christian imagery. According to tradition, she was a resident of Caesarea,  Cappadocia, a landscape in today Turkey, who when she refused to sacrifice to the gods during Emperor Diocletian’s persecution of the Christians, was tortured by the governor and ordered executed.

On the way to the place of execution, she met a young lawyer, Theophilus, who mockingly asked her to send him fruits from “the garden” she had joyously announced she would soon be in. When she knelt for her execution, she prayed, and an angel with a basket of three roses and three apples, which she sent to Theophilus, telling him she would meet him in the garden. In our painting she carries the very same basked with roses and three apples.

It’s now up to you to recreate the story – and maybe to come up with your own story for the unknown Saint!