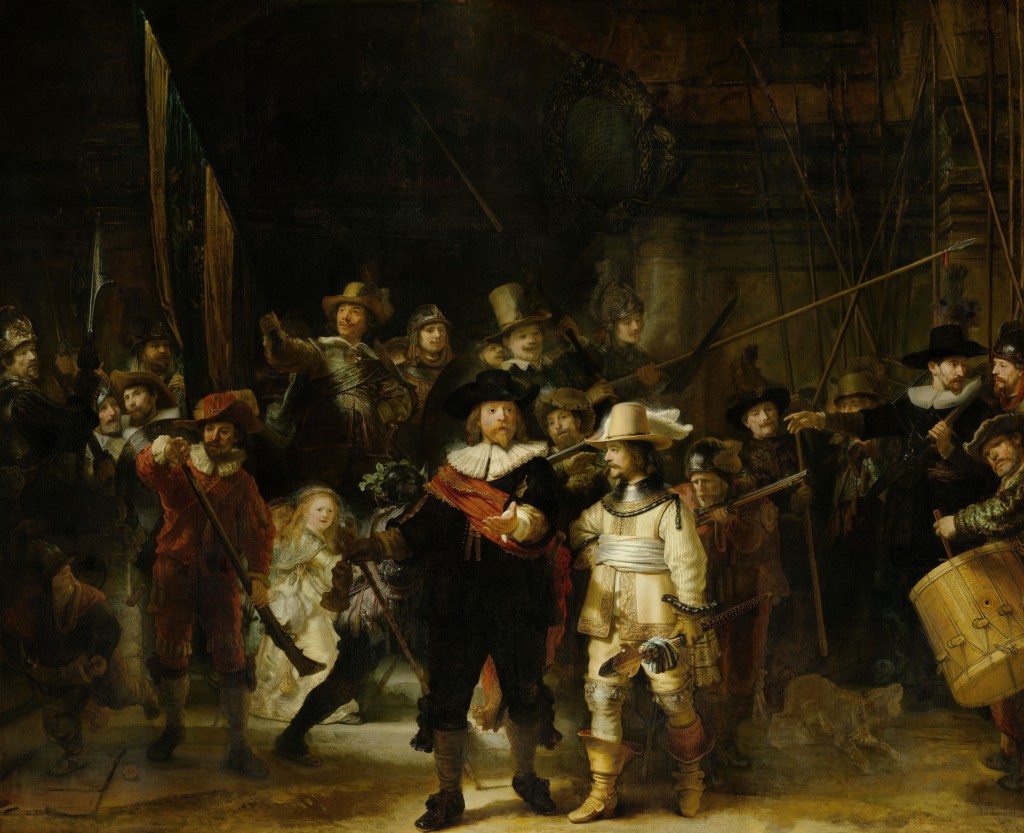 This is really a challenge! Start with a relatively neutral backdrop. Then you need to create small groups within the overall composition. Don not pay too much attention to the exact number of people. As long as you get the main characters in place, you will succeed. Use brooms or sticks to great dynamic lines and movements. And yes: move! Step forward! Role the drums! Regarding the light: it is a relatively dark painting, but don't try to do the same by not using enough light. It will spoil the overall result.

The painting may be more properly titled by its long since forgotten name “The Company of captain Frans Banning Cocq and lieutenant Willem van Ruytenburch preparing to march out.” In the 18th century the painting became simply known as “The Night Watch”.

It is prominently displayed in the Rijksmuseum, Amsterdam, the Netherlands, as the best known painting in its collection. Actually, the Night Watch is one of the most famous paintings in the world.

The painting is renowned for three characteristics: its colossal size (363 cm × 437 cm), the effective use of light and shadow and the perception of motion in what would have traditionally been a static military portrait.

The painting was completed at the peak of the Dutch Golden Age. It depicts the eponymous company moving out, led by Captain Frans Banning Cocq (dressed in black, with a red sash) and his lieutenant, Willem van Ruytenburch (dressed in yellow, with a white sash).

With effective use of sunlight and shade, Rembrandt leads the eye to the three most important characters among the crowd, the two gentlemen in the centre (from whom the painting gets its original title), and the small girl in the centre left background. Behind them, the company’s colours are carried by the ensign, Jan Visscher Cornelissen.

For much of its existence, the painting was coated with a dark varnish which gave the incorrect impression that it depicted a night scene, leading to the name by which it is now commonly known. This varnish was removed only in the 1940s.

A persistent misconception is that Rembrandt’s decline in popularity was due to a negative public reception of the painting. The myth has no reasonable origin as there is no record of criticism of the painting in Rembrandt’s lifetime.

It is more likely that the decline in the artist’s popularity was due not to reaction to any one painting but to a broader change in taste. During the 1640s wealthy patrons began to prefer the bright colors and graceful manner that had been initiated by such painters as the Flemish portraitist Anthony van Dyck.