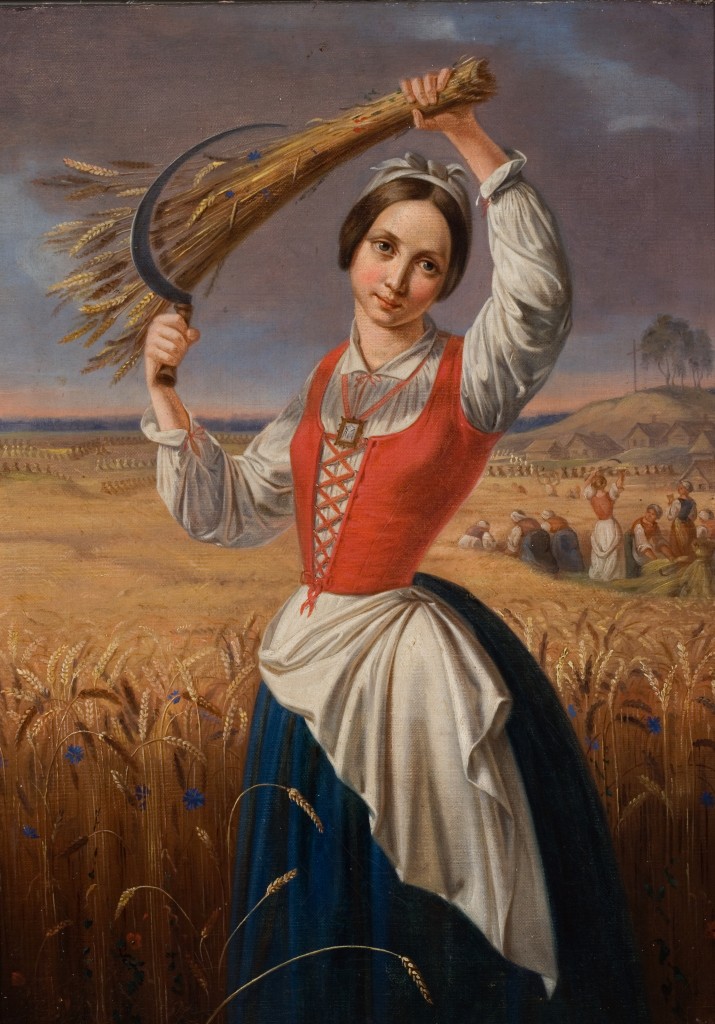 You might like to summon something of the Mona Lisa, who some have said this painting is a reminder of, when recreating it. A pastoral background, perhaps of a cornfield, garden or park, would suit it, and you could use a similarly-shaped prop if you don't have any crops to hand. Til your head and

Kanuty Rusiecki (1800-1860) was a famous 19th century Lithuanian painter of Polish descent. For more than a decade he had studied art in France and Italy and, at that time, was one of the few artists who had the opportunity to improve painting skills abroad.

While living in Rome, Rusiecki took an interest in genre painting. During his trips he sketched Italian peasants. After returning to Lithuania the artist explored countryside of his homeland and created numerous drawings of rural life, folk festivals, and customs. Those drawings later became an inspiration for the series of genre paintings. The Reaper was the first artwork of the series. The painting depicts a rural harvesting scene: a young woman dressed in traditional costume stands in a rye field, holding a handful of fresh-cut rye and a sickle. The influence of artist’s Italian education, based on classical art studies, manifests itself here in admiration of classical forms and tendency to idealisation. The ideas of romanticism spreading in Lithuania at that time, such as interest in folklore, rural life, and a desire to reveal the character and emotions of the person portrayed, are also visible.

The painting immediately brought fame to the artist and fascinated audiences. Back then this uplifting scene also symbolised the unbroken spirit of Lithuanian people oppressed under the rule of the Russian Empire. Bright, festive atmosphere of the painting promised a hopeful future. The Reaper gained a cult status in Lithuanian art and because of girls’ mysterious smile is sometimes even called the “Lithuanian Mona Lisa”. Like its famous Italian counterpart, the painting is one of the best recognisable and most reproduced artworks in Lithuania.