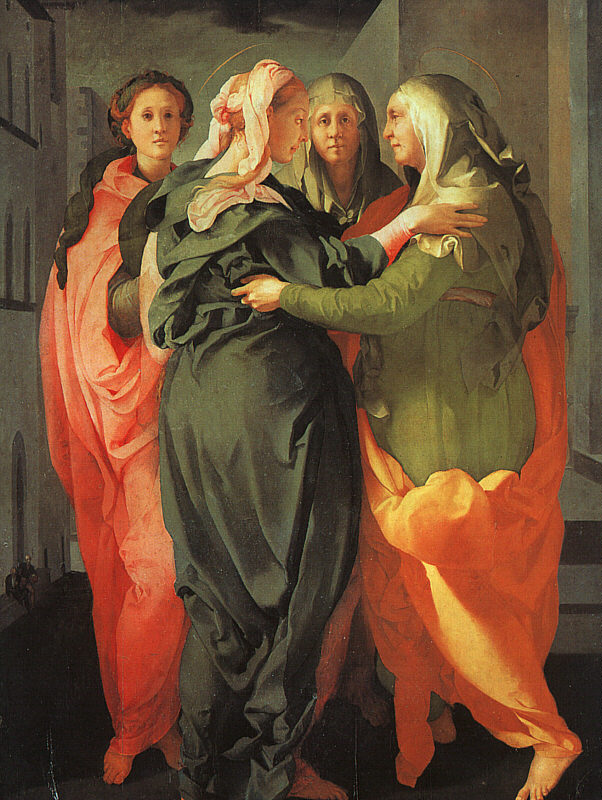 Here you need to focus first on eye lines and gestures. But the figures seem also to be floating, defying gravity. To achieve this supernatural effect, you might try jumping in the air, when you take the picture. Good luck!

The setting for this painting is the visitation of the Virgin Mary on her pregnant but aged cousin Elisabeth who was the wife of Zacharias.  The two figures in the painting with their interlinked arms form a lozenge shape.

This intertwining of figures was one of Pontormo’s trademarks as was the way he makes the characters seem to be almost floating.  The two main characters, Elizabeth and Mary, who are painted in profile, gracefully embrace each other as they exchange glances of mutual affection.  They dominate the canvas as they stand on the threshold of Zacharias’s house.

The two other figures in the background seem quite unbending and statuesque as they look at something outside the picture.  There is a lack of emotion in their faces and they seem to be taking no part in the main event.  They seem older than the main characters and may indeed be servants awaiting their instructions.

In the middle ground of the picture, on the left hand side, we can just make out two small figures seated on a wall looking on at the greeting scene.  They are just small specks in comparison to the main figures and maybe Pontormo, by doing this, is saying that in comparison to Mary and Elisabeth the onlookers are just mere mortals watching an historic event.

Pontormo set great store, some say he was obsessive, in the portrayal of gestures of the characters in his paintings.  In this picture this factor is emphasised by the tense still gazes of the Mary and Elisabeth as they stare at each other, tight-lipped, with little hint of a smile.